Wii Sports has been bundled with the Wii since it’s first introduction in the UK I believe, so most people that have a Wii will have played one or all of the Wii Sports games. Our favourite, the game we keep coming back to, is Wii Sports Tennis.

The control method in Wii Sports Tennis, like most Wii games, is a basic simulation of the real life sport. You swing your controller like a racket at the right time to hit the ball. For some people who have actually played tennis it might be a bit frustrating at first, because you have to scale your actions to the represented size on screen. Long swings don’t always register as you’d expect, and the game actually responds better to short, twitchy wrist movements. But then, it’s much more fun to stand up and swing your arms about whilst lunging around the living room 🙂

The girlfriend and I have both got our Miis (Wii avatars) up to Pro level at tennis and play every day, averaging 5 – 7 ‘sets’ of ‘best of 5’ games a day. In nearly three weeks of playing I’ve actually noticed my left bicep growing larger. What will it be like 6 months from now? 🙂

Posted by AlfieUK in Video Games on January 2, 2010 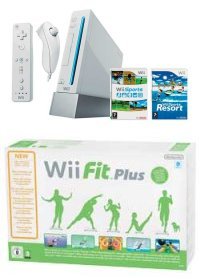 I had toyed with the idea of getting a Wii some months back, but thought that as I already had an Xbox 360 it would be a bit too much of an indulgence. Then my girlfriend and I had a chance to play on the Wii Fit and Wii Sports at a friends house on New Years Eve. I knew then that we would have to have one.

We also picked up a Wii Fit Plus with Balance Board and a second controller (Argos didn’t have extra nunchuks or MotionPlus adaptors seperately), a charging station for the controllers and 2 games bundles.

This has made the Wii a quite expensive purchase, but it is likely to get more usage from both my girlfriend and I than the Xbox 360 does at the moment.